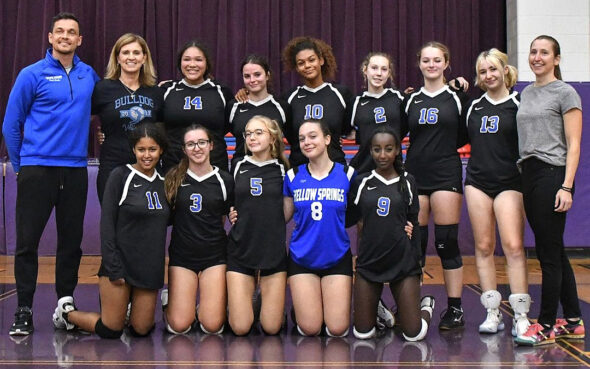 In the postseason, the team suffered a loss against Covington on Tuesday, October 18, falling 3-0.

The loss brought the team’s season record to 15-8.

For the fourth straight year, senior Cheyan Sundell-Turner qualified for the regional cross-country meeting to be held this Saturday, October 29 at 11:45 am at Troy Memorial Stadium.

Sundell-Turner placed 16th at the district meeting on Saturday, October 22 at Cedarville University. Senior Josie DeWine finished her four-year career with a good time of 24:00 in the 5000m. Ninth graders Rebecca DeWine and Sasi Drees-Johnson had a great first year when they also competed at the district convention.

The YSHS boys team placed 24th out of 38 teams at the district meeting. Sophomore Isaac Lewis and ninth-grader Kyle Johnston were the lead runners for the Bulldogs. Kyle Raymer, Kael Cooney, Arthur Devore and Evan Galarza did well in windy and warm conditions.

Coach Isabelle commented that this was one of the most successful seasons, with minimal injuries and a record number of runners on the roster. Josie DeWine and Sundell-Turner are the only graduate runners and have exemplified dedication and leadership during their four-year tenure.
– Coach John Gudgel

The Bulldogs advanced to the District Finals

The Bulldogs advance to the district finals Thursday, October 27 at 7 p.m. and take on Botkins High School at Trotwood-Madison High School. Tickets for the tournament game are available online at ohsaa.org/tickets.

The team’s season record is 17-1-2, with a conference record of 3-1-0. The Bulldogs trail Legacy Christian after their only loss this year and are second in the Metro Buckeye Conference this season.