A $5 million research project led by North Carolina State University’s (NCSU) FREEDM Systems Center focused on improving the efficiency and reducing the cost of ultra-fast charging (XFC) for electric vehicles (EVs) (formerly contribution) was awarded an additional grant of $200,000 from the US Department of Energy (DOE).

XFC will allow EV owners to charge their vehicles much faster than with a Level 1 or Level 2 EV charger. Level 1 chargers, which rely on standard 120V outlets and AC power, are the slowest charging method available, taking around 50 hours to charge a standard 70kWh EV battery. Level 2 chargers use 240V outlets and take around 7.5 hours to fully charge a standard 70kWh battery.

The XFC charger to be developed and demonstrated in this project will be an extremely low-cost, all-silicon carbide modular DC charger power converter that can be connected directly to a medium-voltage distribution system. These chargers aim to reduce the time to fully charge a standard 70kWh EV battery to just 15 minutes. 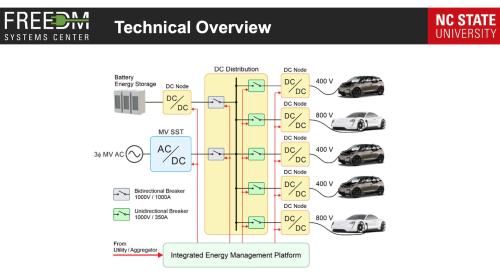 Silicon carbide power electronics can operate at much higher voltages and temperatures than conventional electronics based on silicon technology. This approach eliminates the 60 Hertz transformer that typically steps down line voltage to 480 volts. By eliminating this low-frequency transformer and associated low-voltage switchgear, the overall footprint of the ultra-fast charger is reduced, which is very important for fleet owners with space constraints.

The aim of this new project is to bring ultra-fast charging much closer to market realization and support the further adoption of electric vehicles by reducing consumers’ fear of charging. We could not achieve this without working with project partners like ComEd.

The project will be divided into two phases focusing on cost analysis and system development or system demonstration.

After the charging systems are developed, ComEd’s Grid Integration and Technology (GrIT) Lab in Maywood, Illinois will serve as the first test site for this new technology and allow for independent validation of XFC system performance.

ComEd will also support the second phase of the project by identifying ideal locations in the distribution network to demonstrate this technology and unlock the potential for wider deployment.

The entire $5 million XFC EV development and demonstration project will be funded through employee co-payments, including $200,000 from ComEd. Other collaborators on this project include Danfoss, GoTriangle, the New York Power Authority and the North Carolina Clean Energy Technology Center.