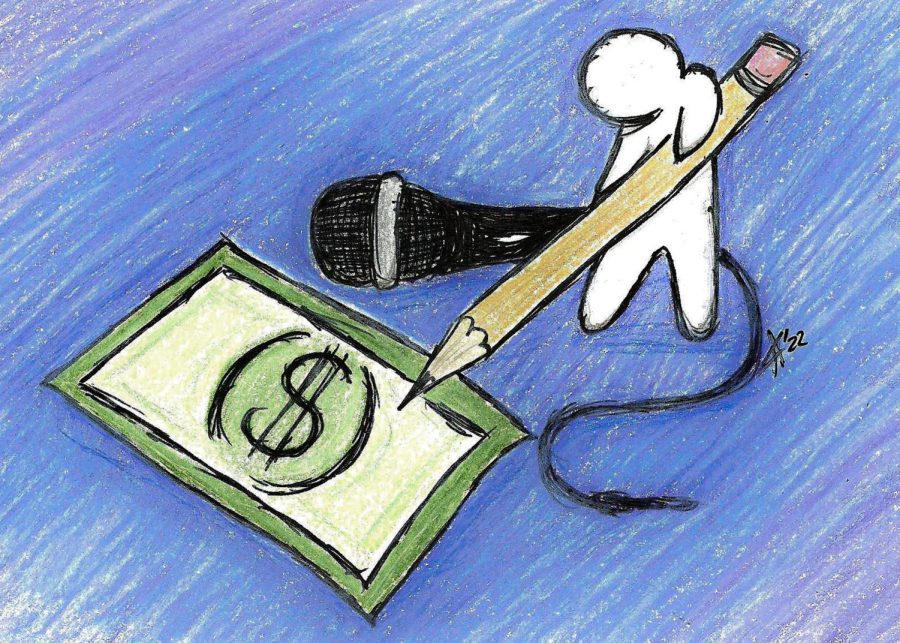 Wage concerns are plaguing the creative industries due to pre-existing wage-to-work inequality and recent inflation.

Concerns about fair pay and the rights of artists and actors have resurfaced over the past two months as creatives have turned to social media as a call to action. Fan and corporate response to these public outcry has been a mix of support and disapproval.

“Creative compensation is sometimes at a disadvantage,” said Russell Cook, associate professor of art at GHC. “I think because music and art aren’t always considered valuable, except in terms of entertainment.”

This disadvantage is reflected in the inconsistent pay of entertainment workers.

“For fair compensation, you want the worker to be able to make a decent living, support a family, take pride in their work, etc.,” Cook said.

Many of these factors underscore creatives’ concerns about their working conditions. Creator of the WEBTOON loveBotChase Keels and Miranda Mundt split up open letter on September 8th, describing the problems they experienced while working as artists and writers for the WEBTOON company.

The letter details issues the creators have experienced, such as: B. communicating with the company, lack of advertising, accessing their serial data on the platform, and meeting the company’s Minimum Earnings Threshold (MRT) payout requirements.

“Some creators are making less than $300 for each 40-panel episode because they have to pay assistants out of pocket, and they still won’t have the blessing of a quick pass to make up for that even a little bit,” Keels and Mundt wrote.

WEBTOON responded to the letter by publishing a Notice Answers to frequently asked questions from creators and a plan to hold regular webinars with creators to discuss concerns.

“We’re in a kind of ‘gilded age’ where work is worth a lot less than it used to be, while corporate profits are at record highs,” Cook said. “It’s a political decision that people have to put up with if there’s any hope of change.”

Cook’s point is why many voice actors (VAs) have reached out to their fandom to explain why they have stepped down from their roles. Most recently VAs like Kyle McCarley Notice Leaving the role of Mob in Season 3 of Mob Psycho 100 and Helena Taylor to announce her refusal to voice Bayonetta in “Bayonetta 3”.

In the statement, Taylor said the payment offered for her role as Bayonetta was “an insult to me, the time it took me to work on my talent and everything I gave to this game and to the fans.”

“I only asked for a fair, living wage commensurate with the value I bring to this game,” Taylor stated in a Twitter thread.

Negotiations were what McCarley wanted when he revealed concerns Crunchyroll, a popular anime streaming website, was about to take over SAG AFTRA Contract for “Mob Psycho 100” season 3.

“It’s not about money,” McCarley said in his video. “They (Crunchyroll) just don’t want to put it on a union contract.”

McCarley goes on to explain how he proposed a deal to Crunchyroll. He would not be unionizing in Season 3 if Crunchyroll agreed to sit down with SAG-AFTRA executives to draft a union contract for possible use on future productions.

“An agreement to negotiate in good faith,” McCarley said.

Since his initial announcement, McCarley has been promoting his negotiation proposal using the hashtag “JustAMeeting” on Twitter. As of Oct. 28, Crunchyroll has yet to respond to McCarley’s calls for SAG-AFTRA negotiations.

“Unions help keep the machine running,” Cook said. “As America’s old system of corporations providing pensions and benefits to workers is dying, unions can be important in maintaining a collective voice in the fight against exploitation.”

Workers in creative fields continue to advocate for better working conditions, pay and an understandable value for their work.

“A bundle of sticks is a lot stronger than one as long as those sticks can’t be persuaded that the rest of the group wants to take their stuff,” Cook said.