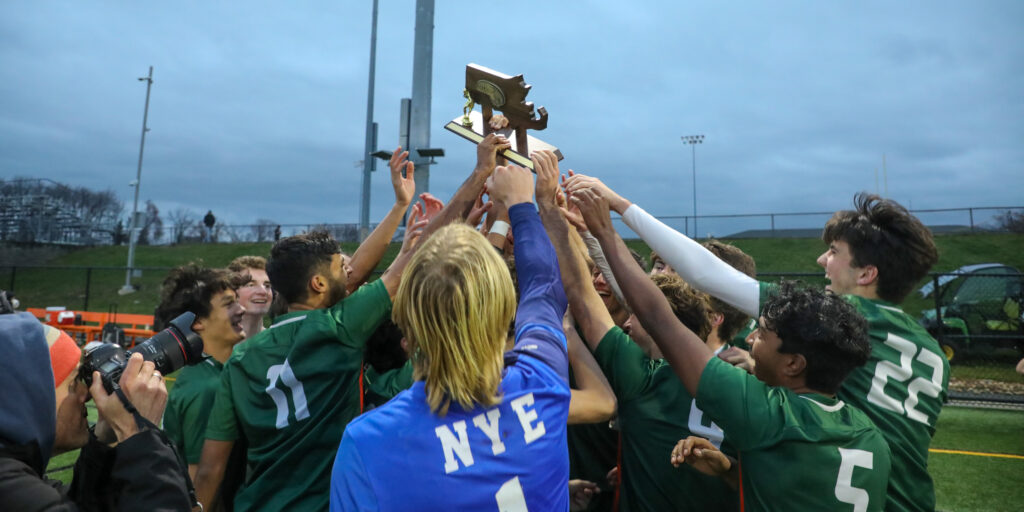 The Hopkinton High School boys’ soccer team’s dream season continues as the Hillers defeated Wayland on penalties after playing to a 2-2 draw in the Division 2 quarterfinals at Hopkinton on Sunday afternoon.

Second-placed Hillers (18-1-2) play Bedford in the state semifinals (match details to be announced).

In the penalty shootout, Hopkinton shot first, with Peter DiMichele finding paydirt. After a Wayland score, Drew Bialobrzeski put the Hillers back in front. On Wayland’s second try, HHS goaltender Max Nye dove to the left and got just enough of his left glove on a low, hard shot that deflected the ball around the post.

Will Bialobrzeski then drilled a shot into the top right corner for a 3-1 lead. After a Wayland score, Dylan Michaud drove a shot into the top left corner. Wayland scored on his fourth try and set up Sean Golembiewski for the winning goal. The elder striker approached the ball with a series of swings and deceptions, then calmly smashed the ball into the top right corner. Golembiewski and Nye hugged while the rest of the team rushed in from midfield to celebrate.

DiMchele and Jack Green had first-half goals for the Hillers, both times answering Wayland points.

The Hillers’ two previous tournament games also went into overtime. Michaud scored in the second overtime to defeat Sharon on Wednesday. Golembiewski tipped a house in OT to beat Fitchburg on November 6th. …

The girls’ soccer season ended Thursday with a 2-0 loss to Bishop Feehan in Attleboro. The Hillers had opened the postseason with a 1-0 win over hosts Lexington. …

Field hockey also ended its season on Thursday with a 3-0 decision against Longmeadow. …

Volleyball lost a hard-fought 3-2 decision to Canton in its lone tournament match on November 4, losing the final game 23-21. …

The football team rebounded from narrow losses to Holliston (21-19) and Natick (28-23) with a 44-20 victory over Thursday night’s visit to Stoughton. The Hillers will have a 7-3 record in their Thanksgiving Day matchup against visiting Ashland. 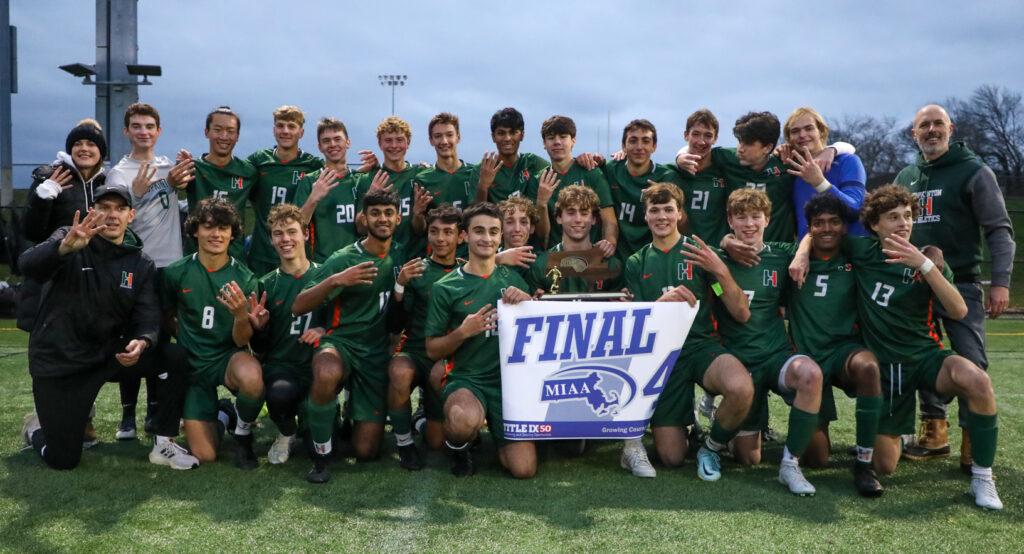 The players pose with the Final 4 banner. PHOTO/JOHN CARDILLO 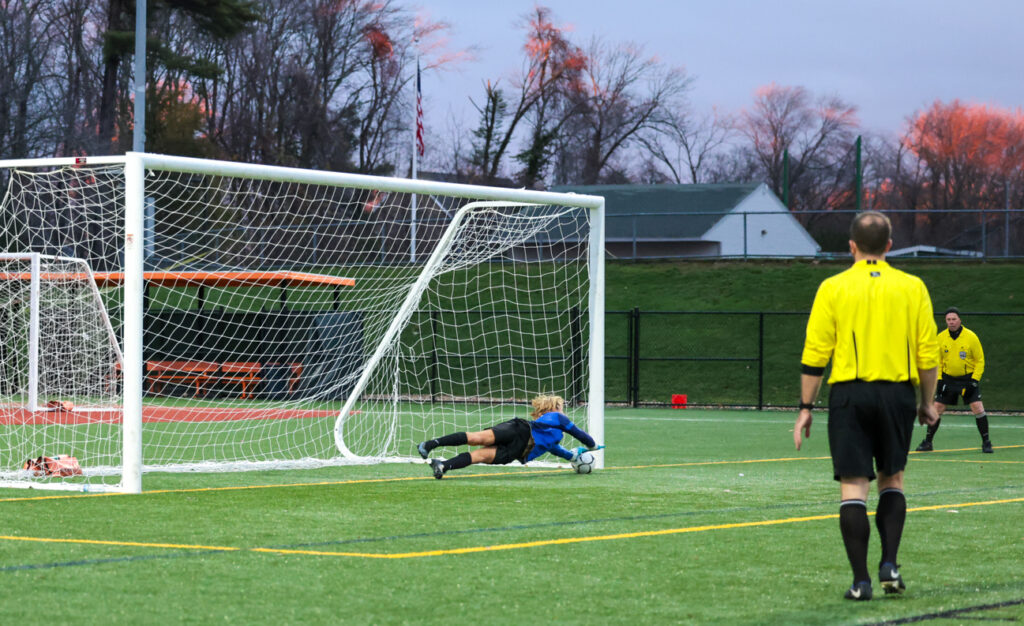 Max Nye makes a decisive save in the penalty shootout. PHOTO/JOHN CARDILLO 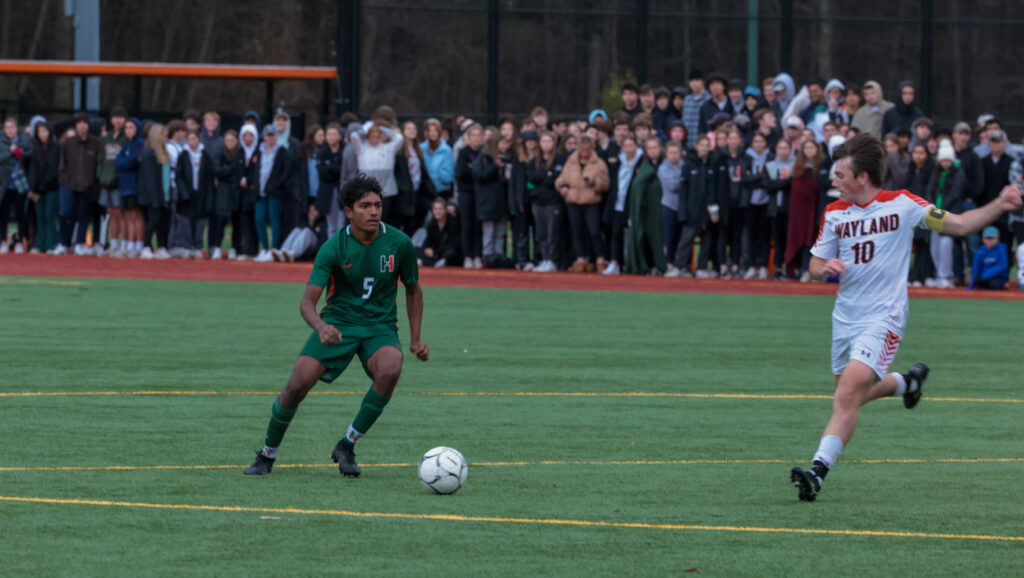 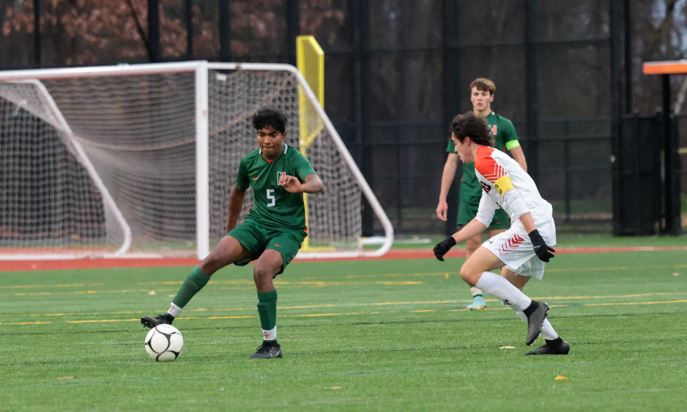 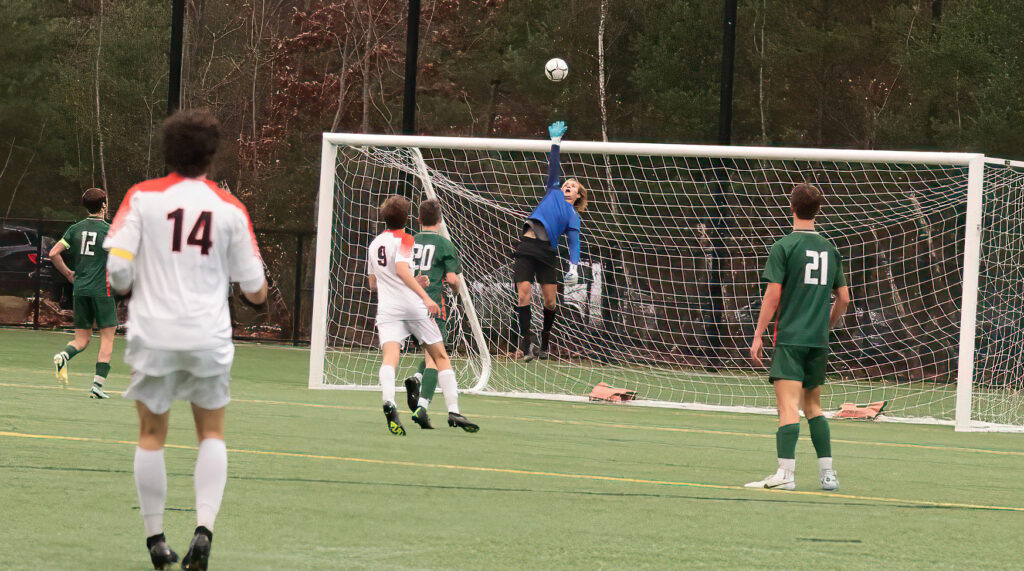 Goalie Max Nye ensures that this shot goes over the net. PHOTO/JOHN CARDILLO 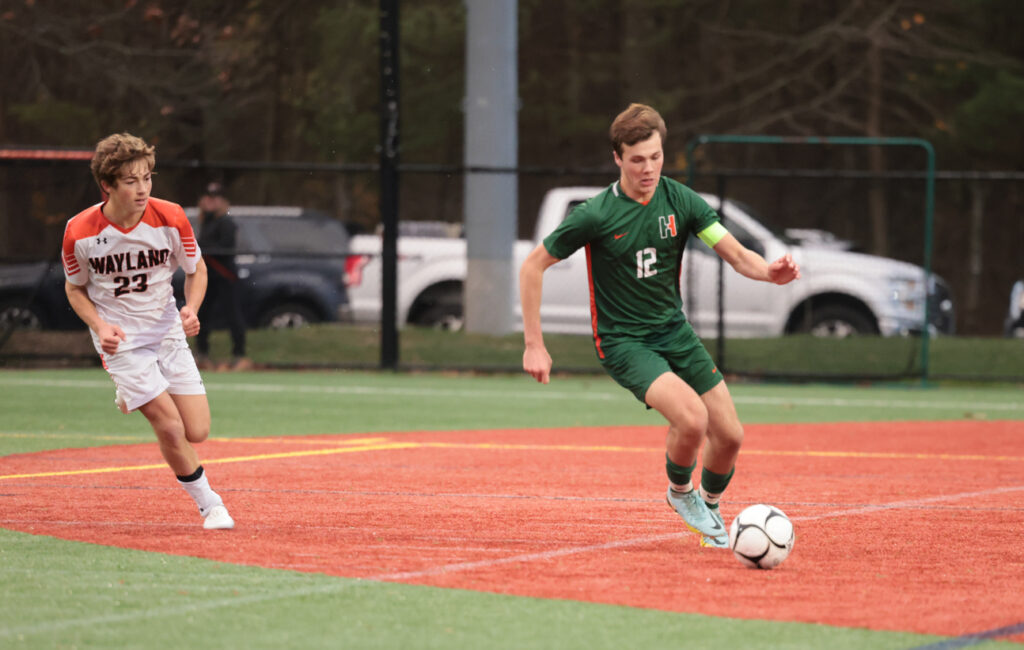 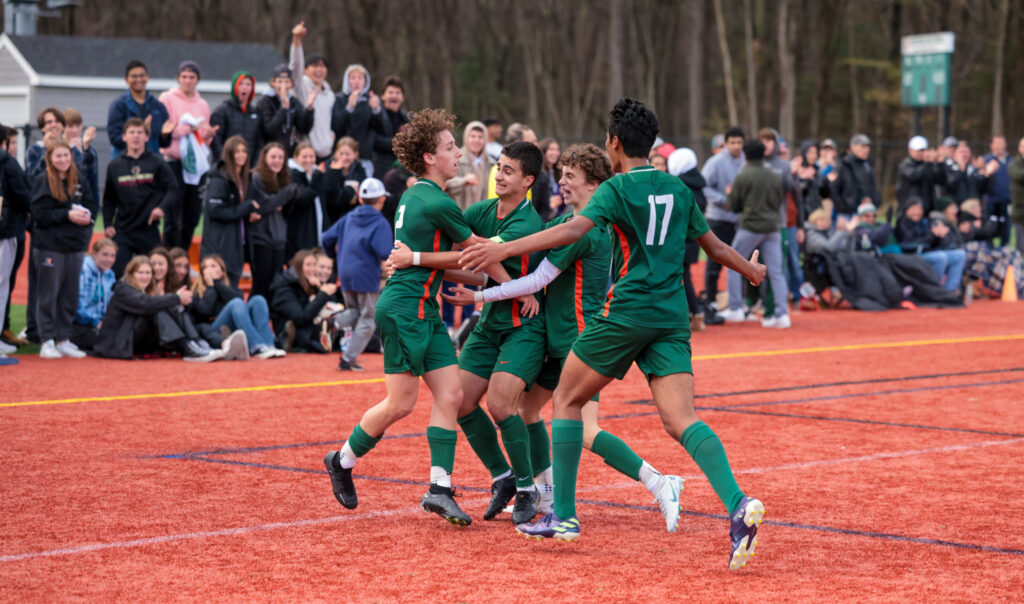 The players celebrate a first-half goal from Jack Green (left) who headed in a corner kick. PHOTO/JOHN CARDILLO 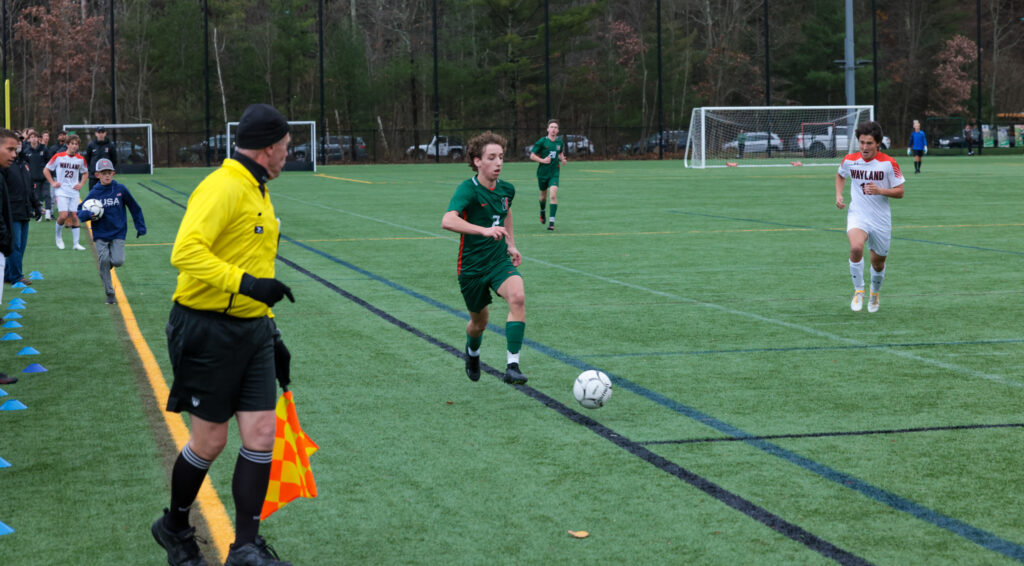 Jack Green carries the ball over the touchline. PHOTO/JOHN CARDILLO 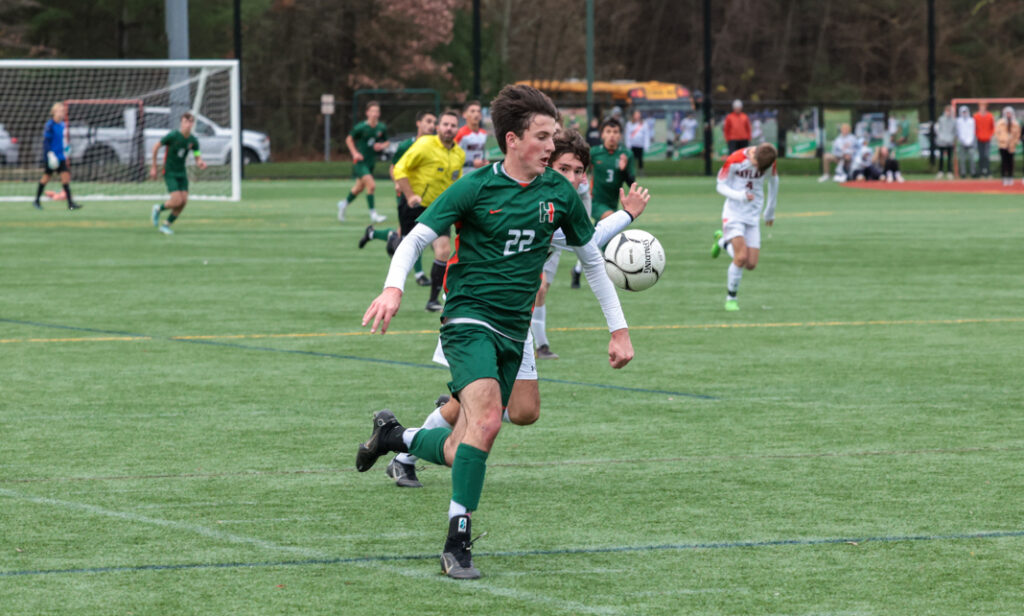 Sean Golembiewski is looking for an opening. PHOTO/JOHN CARDILLO 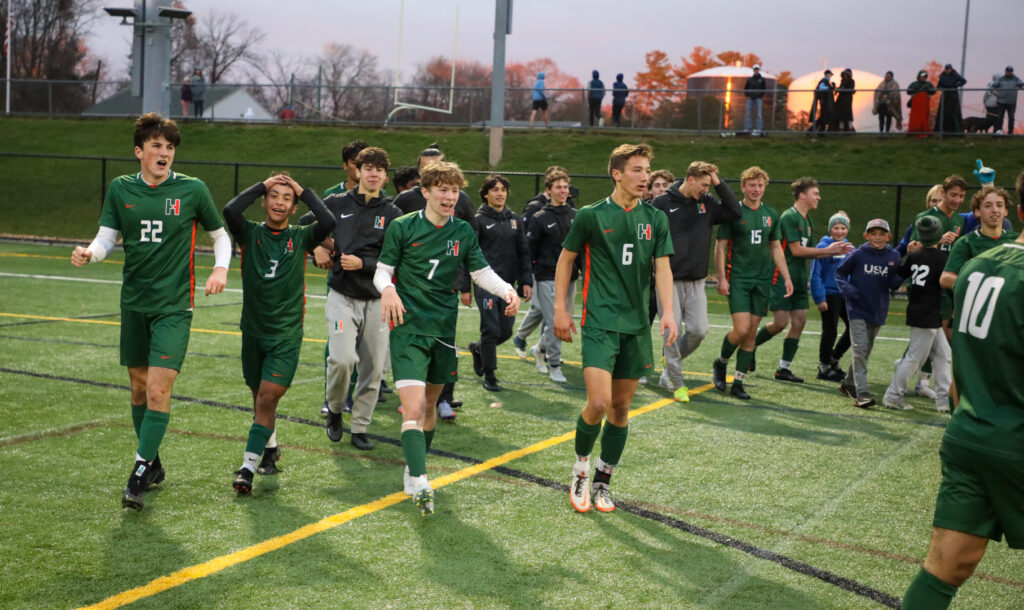 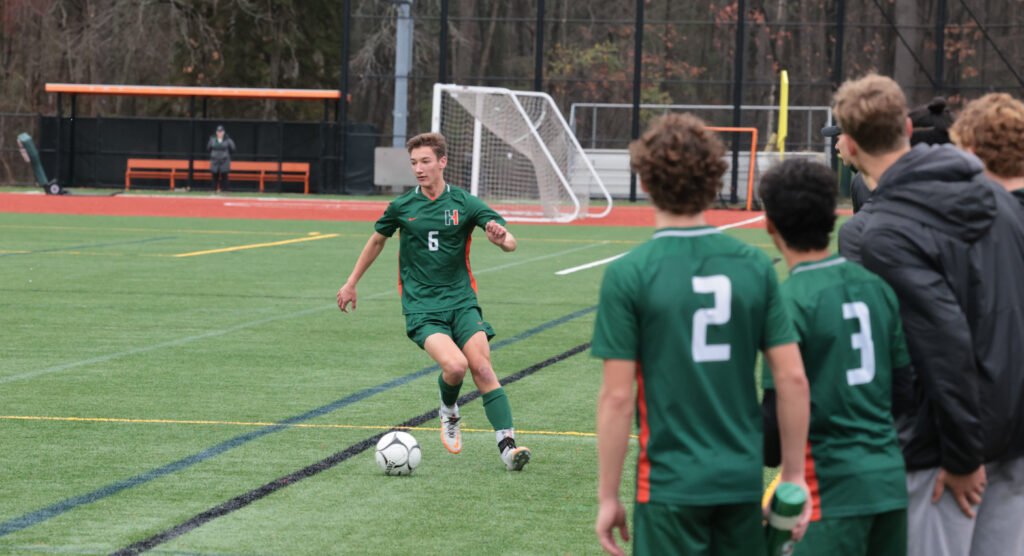