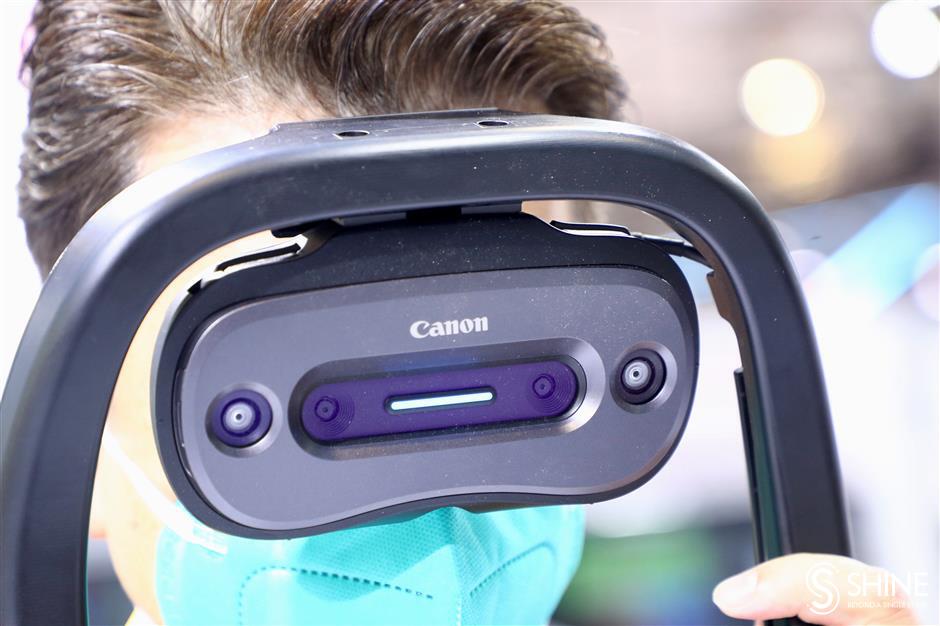 A visitor tests Canon’s MR device at its CIIE booth. The company wants to expand its business in China.

Japanese companies have flexed their technical muscles and shown strong confidence in the growth of the Chinese market at the ongoing China International Import Exhibition.

The products, which are mainly used in the technology and healthcare sectors, have state-of-the-art functions such as mixed reality or MR, metaverse and artificial intelligence. Some of them made their debut in China or Asia on the CIIE platform this year.

Canon, which has participated in the CIIE for five consecutive years, aims to expand new product categories and business in China to make the domestic market the No. 1 regional market by 2035.

Canon, known for its camera business, is expanding its business in healthcare and semiconductor industries and actively exploring opportunities such as MR and 3D modeling, said Kaneko Yusuke, Canon’s chief regional officer for East China headquarters.

“China’s economy is recovering with opportunities, while CIIE is the best platform for us to showcase innovations and connect customers and partners,” said Yusuke at the Canon booth.

Canon showcased MR and 3D modeling innovations at CIIE with smart glasses and cameras that can be used in design, manufacturing, gaming, AR/VR and digital avatars. Some MR machines will be shown outside of Japan for the first time.

Epson presents new technologies and green visions at the CIIE.

On the premises of its CIIE booth, Epson will be showing a virtual tour of the Summer Palace with its projection technicians offering an immersive experience. With AI technology such as vision sensing and laser projection, it also offers a demonstration of immersive football training. This technology can be used in the fields of education, tourism, sports and to display traditional culture.

As part of its green strategy, Epson is also presenting its energy-saving printers. Epson’s goal is to become carbon negative by 2050 and to eliminate the use of exhaustible underground resources such as oil and metal.

Omron is again exhibiting its latest generation of table tennis or pingpong robots at the CIIE. With its technology such as AI and robotic arms, Omron can offer solutions to improve work efficiency and related management.

On Sunday, Olympus signed an agreement with Rongtong Medical for medical devices and healthcare services at the CIIE booth.

Olympus will showcase various medical innovations including endoscopic devices that play an important role in the prevention and treatment of gastrointestinal diseases and gastric cancer. Its narrow-band imaging, or NBI, technology for early detection of cancer was deployed in 5,000 hospitals nationwide by September, Olympus said.

Visitors seem to be interested in the technology and products being shown at CIIE.

At the Canon stand, a man eagerly expresses his desire to buy a lithography machine. Lithography is an essential tool used in chip fabrication and represents a technological ladder at the highest level in the semiconductor industry.