SPORT AT HAND • The end of Saturday can come at any time. But it usually ends when we realize we’ve had enough college football for the day. That’s how it was last night, although the last game was a bit of a surprise.

• Some people love when Hawaii plays a home game and it’s on ESPN. For us mainlanders, a 10pm start means an end just before the bars close. We do not belong to this degenerate crowd. nope

Heck, last night’s Big Sky Conference showdown game in Sacramento, a game that threatened to bleed this morning, was more than enough for us. Making it a near perfect day for this always exciting conference was only part of the plan.

OK, we’re joking. Who knew it was going to be such a great day in heaven? Unlike the one who put the schedule together.

For us, it started in the early afternoon, culminating in an occasional visit to Portland State at Idaho’s game. In the second half, the Vandals stayed among the undefeated teams in conference play, in which they outperformed the visitors by a staggering amount. And the only one of the three expected among the powers that be in August.

The other two? Montana State, who finished second in FCS last season, and Sacramento State, the defending champion.

Neither of them had it easy on Saturday.

The Bobcats played a wet, wild game in Bozeman that not only illustrated the importance of the long snapper, it should also be played in replay on Chris Rubio’s website. (For those of you who don’t know, Rubio runs a school for long-timers—yes, there’s a school for everything in sports.)

Weber State long snapper Grant Sands, a respected veteran, launched four snaps over the punter’s head, all of which resulted in safes and helped third-place Montana State go undefeated in the conference with a 43-38 win. The Wildcats, who finished in fifth place, suffered their first loss of the year.

Second-tier state Sacramento didn’t need such generosity. But they needed a fourth-quarter rally to catch up with No. 7 Montana and win 31-24 in overtime. The game lasted almost until midnight on ESPN2, but it was worth the nearly four-hour investment. It was a tough, well-played battle between two of FCS’ best teams. And it was Montana’s second loss in a row, putting the preseason favorites all but out of the conference race.

Montana State leads the table 5-0. Sac State and Idaho are right behind, 4-0. These two are meeting in California next week. Unfortunately, both miss out on the Bobcats, who have a bye and then two relatively easy road games this week — Northern Arizona and Cal Poly — before ending the season with the Montana rivalry game at home.

With Sacramento State still having to play Idaho (home) and Weber (away), it wouldn’t be a surprise if the Hornets, Bobcats, Wildcats and Vandals all topped the standings with one loss. Wouldn’t that be something? And on par for the Big Sky’s course this season. Or just any time of the year. 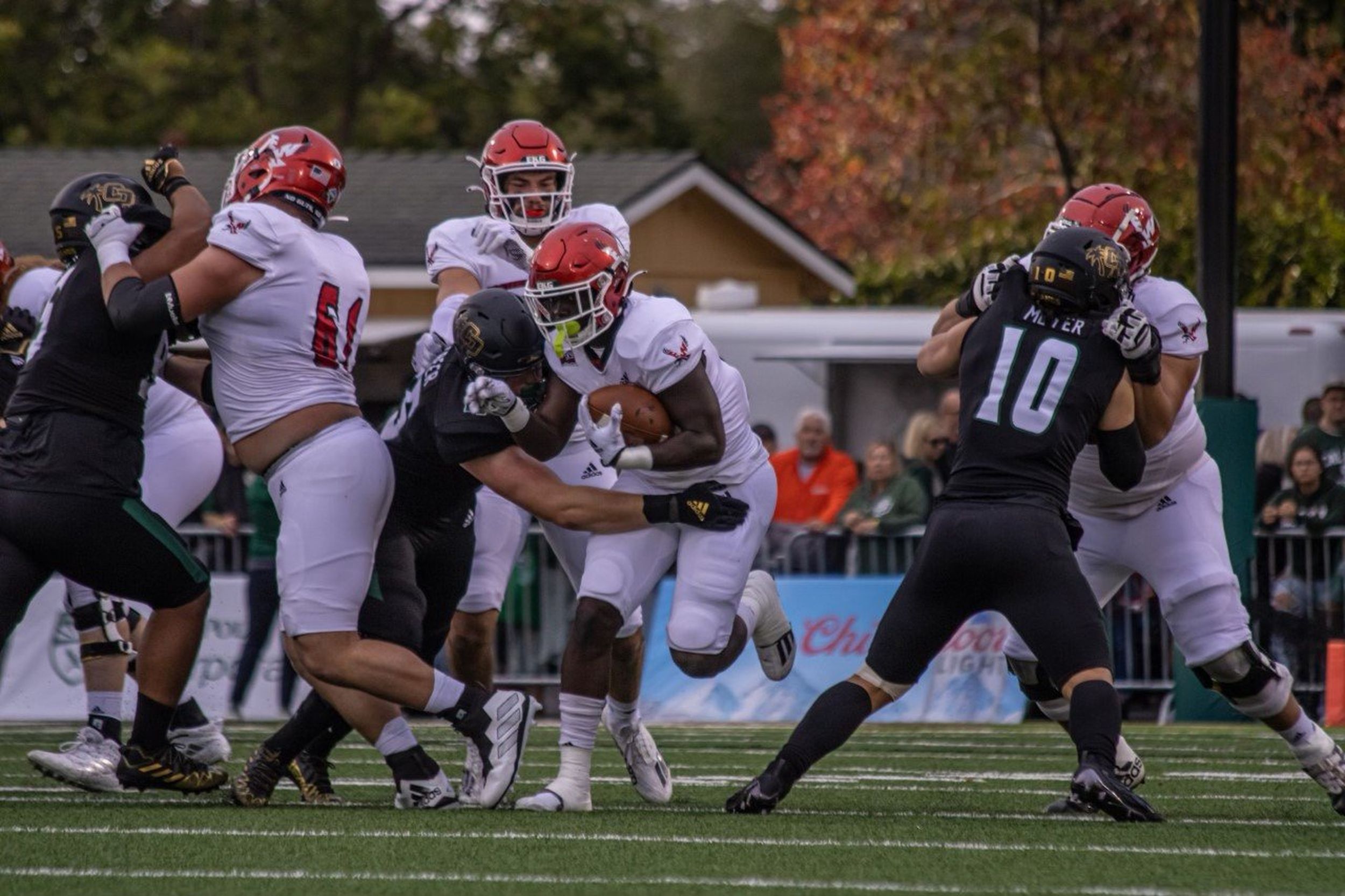 • There was a disappointment Saturday. Eastern Washington’s game against Cal Poly was listed in the SR as being televised on SWX. Well, there was a game between the schools on the canal. But it was the 2018 game. By Cheney.

Talk about feeling disappointed. We were all ready to see the Eagles win their first big sky game of the year on the big screen from the comfort of our living room, and no. We’re stuck watching it on our phone.

Well, that’s up to us. We still haven’t figured out how to stream ESPN+ on our majestic TV without using Apple TV. That wasn’t an option last night as we also wanted to watch the huskies game. The back and forth just isn’t worth the time and energy.

Washington’s victory at Cal ended up on our TV (along with the occasional glimpse into the latest Star Wars film) and the Eagles flew under the radar on iPhone.

Not perfect, but neither was the game. Far from it. Eastern and Cal Poly took turns flipping the ball — sometimes on back-to-back games — or throwing short, unproductive passes. There was also no conference victory and the duel between the last two football coaches of EWU looked like a game between siblings. 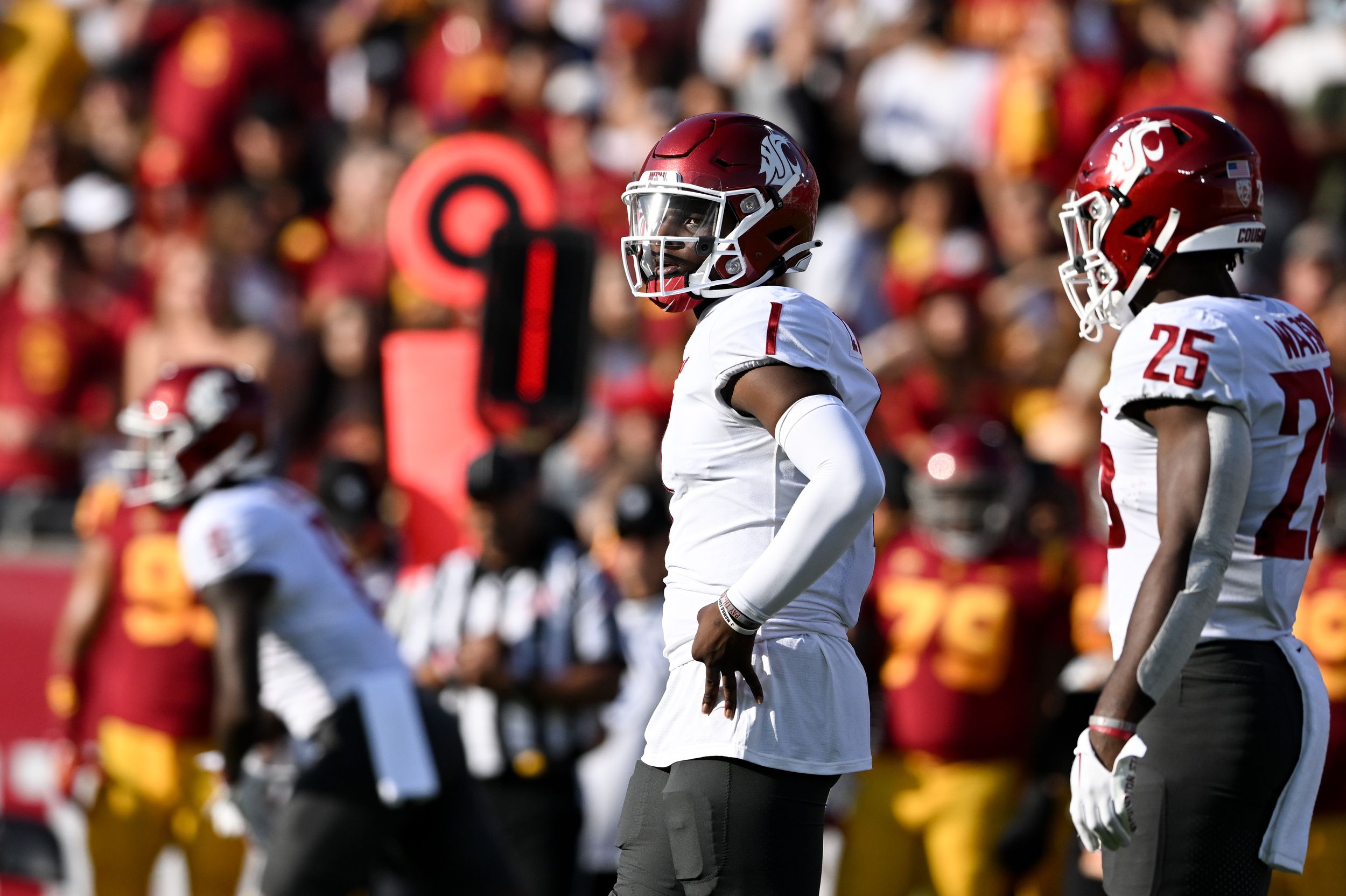 WSU: The Cougars had a reunion yesterday. So does Utah. It’s not a coincidence. The two meet in Pullman on Thursday evening. Colton Clark has his first look at the game. It’s supposed to be cold but dry that night, if you’re wondering. … We banged on that drum for most of the preseason. It was pretty obvious that Washington State’s fortunes would rest on its untried offensive line. Such was the case, as Jacob Thorpe outlines in this column. … Elsewhere in Pac-12 and college football, the showdown in Eugene was mostly about quarterback play (and an onside kick). The Ducks’ Bo Nix was focused, it didn’t seem like Dorian Thompson-Robinson was that solid on that front. Oregon’s 45-30 win not only kept it atop the conference standings, but also kept the Ducks in the playoffs. UCLA needs to regroup after its first loss. … That’s part of what Jon Wilner elaborates on in his usual Saturday night Mercury News column. … As noted above, Washington won 28-21 at Berkeley. It was the Huskies’ first road win in a while and made them eligible for the Bowl. … California’s season is passing again. … Stanford lost by a point to Oregon State in the last second a few weeks ago. Then it won by two at Notre Dame. Yesterday it picked up a one-point win, holding off Arizona State 15-14. The Sun Devils lost the momentum brought about by their coaching change. … Colorado looked like the team under the now-fired Karl Dorrell as Oregon State broke the will of the Buffs with a 42-9 win and became bowl-eligible. … Arizona also said goodbye. … We wondered when someone would write about it. 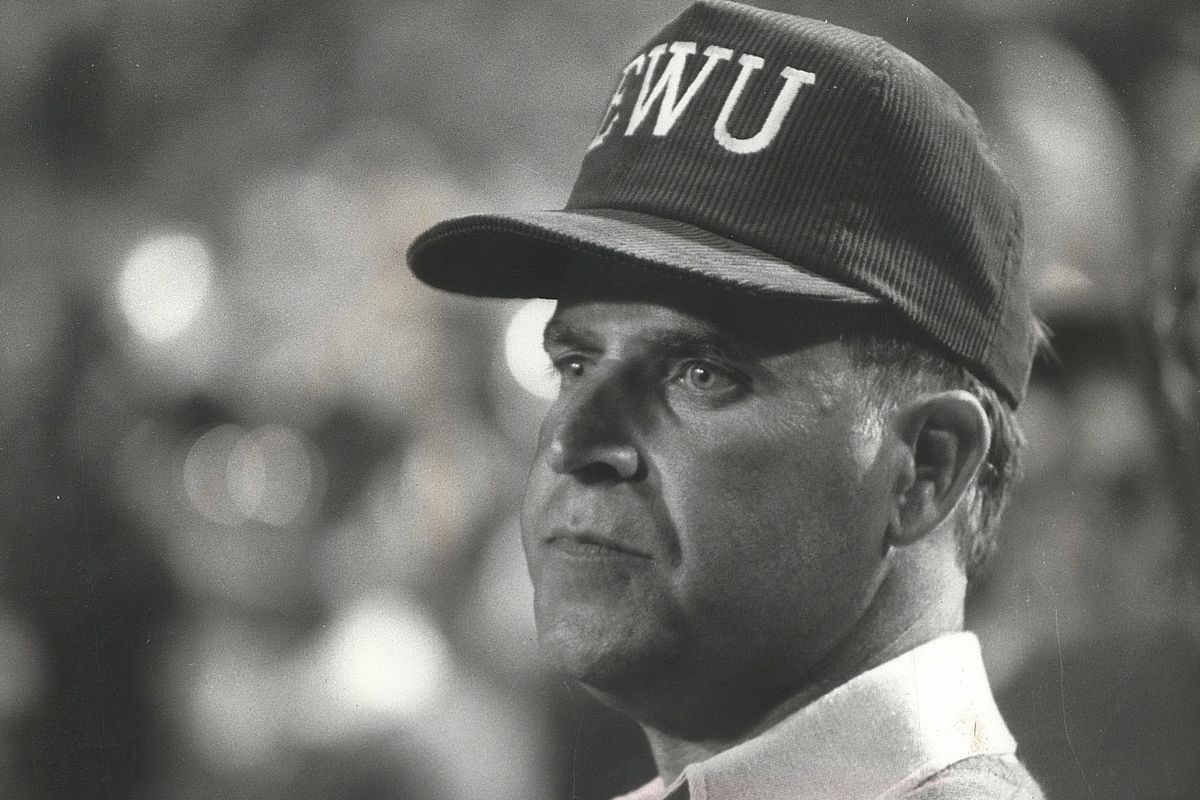 EMU: Yes, we have Dan Thompson’s story about the Eagles’ win in California. But we also want to make sure you don’t skip Dave Boling’s story about former Eastern coach Dick Zornes. It’s a master class on how to write a memoir without being sentimental. It’s also a fun read about one of our favorite football coaches the area has ever produced. We once spent some time with Zornes and Ed Fisher when they were helping Ed’s son Adam coach in the East Valley. What struck me in this experience was how expressive Zornes’ hands were. Not in an Italian way to talk to them, but how broken your fingers were. They were the hands of a man who spent his life in the trenches of football and used those hands not only to play the game but to teach it. Occasionally one of the fingers became collateral damage. We’re sure it never slowed him down a bit. Or changed his practical approach. …Around the big sky, we took a look at the victories of the states of Sacramento and Montana and linked the stories there. … UC Davis played like the team everyone thought they were and defeated Northern Colorado. … Northern Arizona traveled to Pocatello and picked up a 24-10 win over Idaho State. 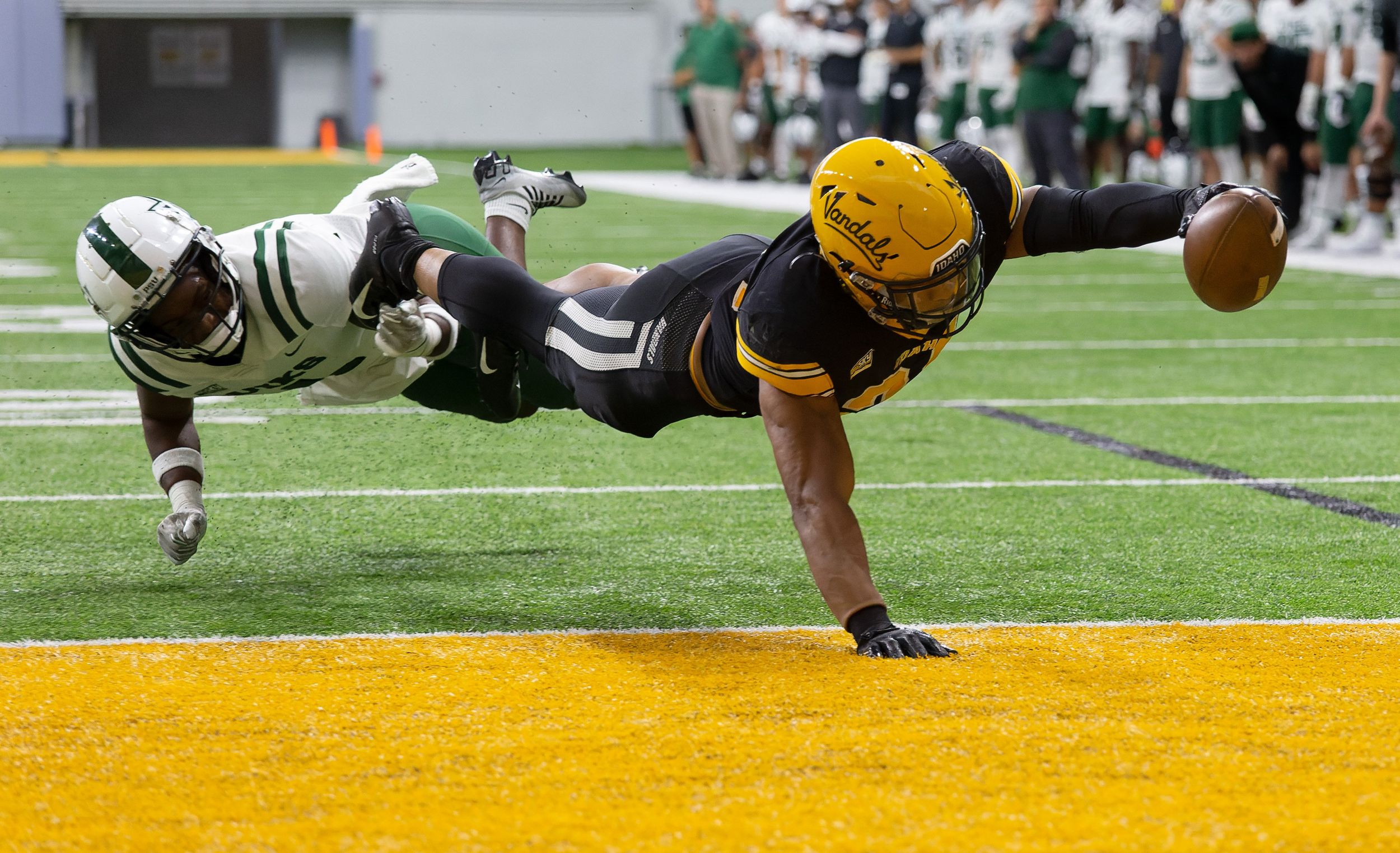 Idaho: The Vandals bowled Portland State in the second half. Peter Harriman has been to the Kibbie Dome and has this game history. … We can also share Geoff Crimmins photo gallery.

Preparations: Yes, Friday night was exciting. And Dave Nichols covers it all here in his Friday Night (High)lights column. But Saturday was good too. Dave has a recap of all the action and this coverage of Clarkston’s 24-17 win over Shadle Park at U-High.

bosses: Spokane went over the hills and lost 8-3 to the Seattle Thunderbirds. 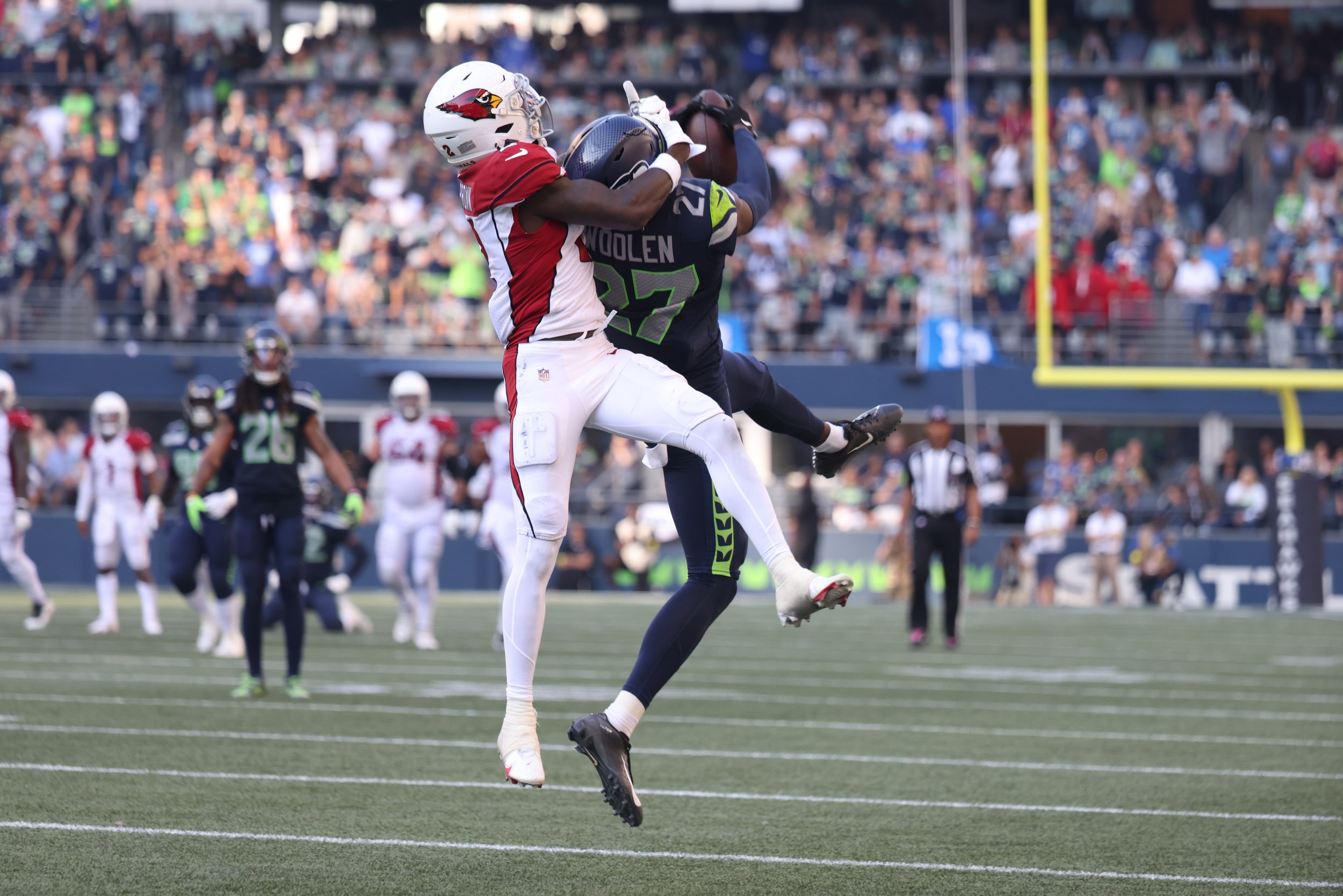 Seahawks: It’s been a surprisingly successful season so far. But a win over the Chargers in Los Angeles today would give the Hawks some credibility. … There’s a lot to see today, including some fresh faces.

• We sat on our can way too much yesterday We didn’t take as many steps as usual between football and work meetings. We’ll do it again today. We promise. Incidentally, Nick Saban is owned by Mike Leach. That’s all. See you later …