It happens four times a year.

You could call it The Sports Equinox – but it has nothing to do with the seasons.

Radio veterans gather at Lakeside Park’s Barleycorn’s to relive the past – and brag about their successful careers – true or not.

The four-yearly gathering — dubbed The SuperJox Lunch — was the brainchild of West Virginia Radio Hall of Famer Mike Tussey — and will soon be inducted into the Northern Kentucky Sports Hall of Fame.

“Most of the 25 guys on my list are retired,” said Tussey, who called play-by-play on the radio for Northern Kentucky University and later stood behind the mic for Thomas More University football. 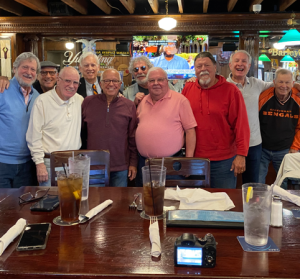 The creator of the event, the Ringmaster if you will, is at the ripe young age of almost 84. However, Mike Tussey is still going strong.

“I still have it right here,” he smiles, pointing to both ears – signaling his brain is still sharp as a pen.

Tussey, a resident of Florence, lists basketball games for Morehead State in Kentucky on ESPN-3.

But those who do enjoy the small talk and camaraderie between their longtime professional friends.

The man who built Jacor Broadcasting and eventually turned 700-WLW Radio into The Big One.

He remembered the so-called radio wars, which were then battles.

“Radio wasn’t dominated by the corporate giants then,” he said, “and a conglomerate couldn’t own multiple stations like they do today.”

Michaels recalled the struggle his 700-WLW radio had with 55 (AM) WKRC.

“It was so competitive,” he told the Northern Kentucky Tribune“Our newscasts would never mention 55 as the temperature for the weather.”

Hamilton County CPA Dusty Rhodes has seen his radio career come full circle. He was part of the Original Good Guys at 1360-AM WSAI.

“Our audience was so strong,” he said, “you could drive down with the windows down all over Price Hill in the summer and hear WSAI.”

And it was Rhodes, along with his WSAI disc jockeys, who were responsible for “Beatlemania” in Cincinnati. They brought the Beatles to town in the summer of 1964.

Rhodes recalled that “Skinny” Bobby Harper, Paul Purtan, Mark Edwards, Steve Kirk and himself, all of whom worked at the radio station, were having a drink one evening and were discussing sending a telegram to England calling on the Beatles to stop in Cincinnati on their US tour.

And it was repeated at the SuperJox lunch the other day.

The other Hall of Famer in the house – Marty Brennaman – the longtime, now retired, voice of the Cincinnati Reds.

Maybe he summed it up best.

“Our generation is probably critical of the next generation,” he laughed. “But I’m sure it was the same when we made our row – that’s the nature of this business.”

He’s also very involved with projects at Villa Hills – particularly raising funds to rebuild the clubhouse that was destroyed by fire earlier this year.

“EBN is a thing of the past, at least for me,” he said, “it was fun. And we’ve had tremendous success. I don’t think they’ll see anything like it again.”

He recalled that satellite radio and podcasting—perhaps more than anything else—have left a dent in radio listening habits.

“It’s in my blood,” said the man inducted into the Cleveland Radio Hall of Fame. He’s had stints in Cleveland, Denver, WLW, WGRR and the newest – WDJO.

“We have an audience,” he said, “these baby boomers love the oldies. We just need to get more people in and around the city aware of us.”

Ric Robinson, who worked in West Virginia and later worked at WLW; Denny Wright – Mike Tussey’s play-by-play radio partner on both NKU and Thomas More and former host of the Cincinnati Bengals Radio Network – Alan Cutler made his debut.

Who says you have to be retired to be at the SuperJox lunch?

In fact, most members are still hard at work – because they love what they do.