The ultimate inter-island rivalry is reignited this week as Martha’s Vineyard Regional High School prepares to host Nantucket in a series of fall athletic competitions culminating in a fight for the coveted Island Cup on Saturday.

“It’s going to be a busy campus,” high school athletic director Mark McCarthy told the Gazette this week. “I just feel like that’s how homecoming should be.”

The rivalry between the Martha’s Vineyard and Nantucket football programs dates back to 1953 – the first year Vineyard assembled an organized football team. A few games were played between the two teams in the early years until the founding of Martha’s Vineyard Regional High School in 1960, when the game became an annual tradition for both islands.

The title trophy, the Island Cup, was bought by Vineyard coach John Bacheller in his second year as head coach in 1978, further legitimizing the fabled encounters between the two islands. In a 2003 article reprinted in the Vineyard Gazette, Mr. Bacheller reported a trip to the Falmouth Trophy Store to purchase the finest trophy they had. 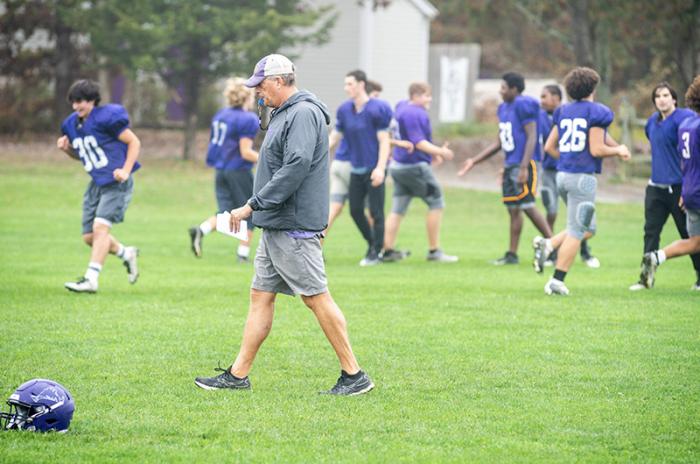 The football team prepares for the game against Nantucket. — Ray Ewing

Now another Vineyard coach has a chance to make his mark on the game. First-year head coach Tony Mottola has worked this season to rebuild the foundation of the high school football program, focusing on the fundamentals with a gentle, instructional focus.

“We’re thrilled – it’s my first attempt at this whole thing,” said Mr. Mottola. “I just soak it all up.”

Mr. Mottola will lead the Vineyarders onto the field with a 1-6 record at 3 p.m. Saturday to face the 0-9 Nantucket Whalers. He said the team hopes to keep the game tight and give the Vineyarders an opportunity to retire in the fourth quarter.

“We’re just getting closer to another week where we’re just trying to get better as a team,” said Mr. Mottola.

This weekend is also the first time the winery is hosting the Island Cup in its new format, which features competitions between the wine growers and the whalers in almost every fall sport. The inaugural event was hosted by Nantucket last year.

“If they all play at the same time, it’s going to be a really electric day up here,” said Mr. McCarthy.

The boys’ and girls’ cross-country teams, which set the pace for the Island Cup weekend, will host the high school league championships starting at 2:00 p.m. Friday. Coach Joe Schroeder said this week the boys’ team will be looking to compete for the league championship and the girls, who don’t have a full team, will be battling for strong personal races and high individual placings.

“They’re excited because they don’t have to travel,” Mr. Schroeder said. “You have to defend your home game, which is fun.”

On Saturday, the boys’ and girls’ soccer teams and field hockey team aim to close out their season with victories over their sister island rivals.

“It’s going to be a very emotional game for us,” field hockey coach Becky Nutton told the Gazette. “This will be our senior game”

The field hockey game begins at 10:30 a.m. at the high school, with a ceremony for seniors beginning at 10 a.m

“Nantucket is a really tough rival,” Ms. Nutton said. “They bring out the best in us.” 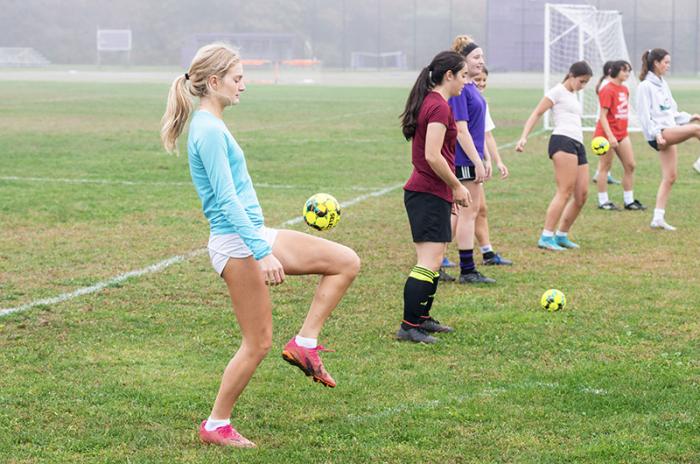 With the boys’ and girls’ soccer teams battling for seeds in the state tournament, Saturday’s games will have playoff implications for the Vineyard teams. Boys coach John Walsh said a win

against Nantucket would tie the team for a league championship and could put them in position for two home playoff games.

“We really care about this game because if we win I think we get a piece of the league title,” said Mr Walsh.

The head coach said he expects strong defensive play from the Whalers and said the Vineyarders would work to pass their opponent and take advantage of opportunities late in the game.

“They always give us a tough match no matter where we play them,” he said.

The girls’ soccer team is looking to secure a win Saturday to boost their state standings in hopes of skipping a wildcard play-in game and earning a home-court playoff game, coach Matt Malowski said. 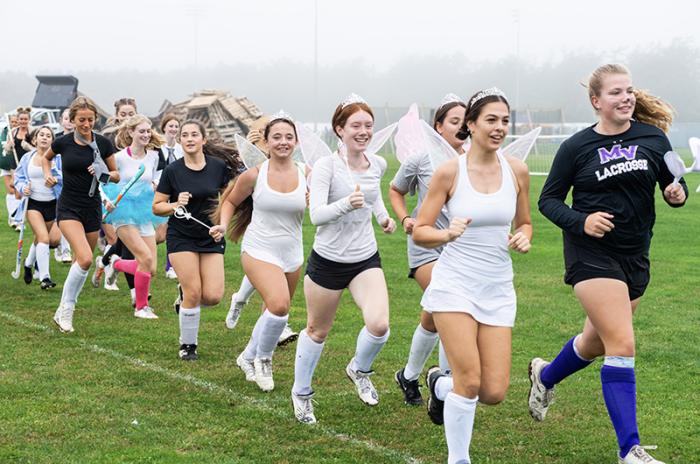 Field hockey teams play at 10:30 am on Saturday. — Ray Ewing

“It could affect some of the postseason seeding,” said Mr. Malowski.

He added that the game, which starts at 10:30 a.m. on Saturday, will also serve as a senior game and carries emotional weight for both players and coaches.

To kick off the Island Cup, the high school hosted a bonfire Wednesday night that was attended by teachers, coaches, players and students alike. With smoke billowing high above the school and trees surrounding the playing fields, the Vineyarders braced themselves for the weekend ahead and fanned the flames of a decades-old rivalry.

“I think either team can win,” said Mr. McCarthy. “We definitely have the ability to win.”