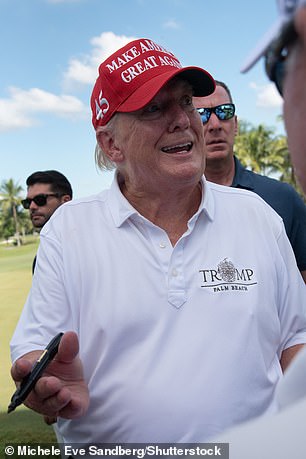 Donald Trump lashed out at Fox News again on Sunday, this time to slam his once-popular network for hosting an interview with Texas Democratic Rep. Al Green.

The veteran lawmaker came to Fox News Live on Sunday to discuss his party’s midterm strategy and was particularly pressed for Democrats’ responses to rising crime and the high cost of living.

But Trump took issue with the media giant inviting Green in the first place – and suggested no “conservative” media outlets should give the Democrats a platform.

“Why would Fox News make SleazeBall Congressman Al Green spit his stupidity out?” wrote the ex-president on his platform Truth Social.

“It’s time to get back to basics. Let him and other Slime like him continue to ruin MSDNC and CNN who are dying.’

“MSDNC” was Trump’s favorite name for the left-wing network MSNBC.

“Are you keeping them off Conservative Media if that’s an accurate definition of what has become of Fox?” he finished it.

It’s not clear why Trump specifically targeted Green — a member of the House Financial Services Committee, the Homeland Security Committee and the Congressional Black Caucus.

He wasn’t the only Democrat to appear on the network today — Senator Chris Coons also joined Fox News on Sunday ahead of Green’s interview.

The animosity may stem from Green’s three impeachment attempts against Trump while the former president was still in office.

Green was the first House Democrat to endorse the idea of ​​impeachment against him, introducing the articles in 2017 when Republicans still controlled the chamber. 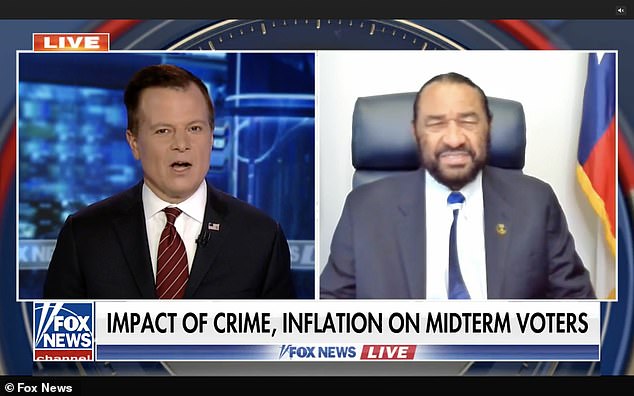 All three of his efforts failed.

During his interview on Sunday, Green mentioned Trump only once, when he denied Republican allegations that Democrat-run areas have higher crime rates.

Fox News Sunday content is generally more objective than its evening opinion programs, and it is common for these programs to feature at least one Democratic lawmaker or expert.

But this Sunday’s attack isn’t the first time Trump has rebuked the network for its daily coverage over the weekend.

‘Wow! Fox News is really pushing the Democrats and the Democrat agenda. Getting worse every day,” he wrote on Truth Social on Sunday, Sept. 4. 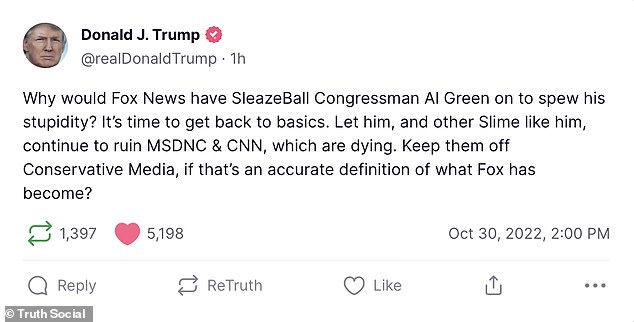 “So many Dems are only interviewed with softball questions, then their fellow Republicans get creamed.”

In late June, Trump criticized the network’s flagship morning show, Fox & Friends, for discussing polls showing Florida Gov. Ron DeSantis overtook him on a possible 2024 vote while he was discussing another poll reported in which Trump himself came out on top.

“This show was awful – it went to the ‘dark side,'” Trump wrote on Truth Social at the time.

“They quickly cite the big Turning Point Poll win by nearly 60 points over the number two Republican and then hammer me with runaways,” he added, refusing to use DeSantis’ name.

Murdoch reportedly even said that another Trump campaign would be bad for the United States.