Congressman Jim Clyburn (DS.C.) took to Fox News and backed his comments by pointing out the historical “parallels” he sees between the Nazi Party in the 1930s and the Donald Trump cult today.

“In recent years you have spoken repeatedly about Hitler, about National Socialism, about Germany in the 1930s.” Fox News Sunday Hostess Shannon Bream said to the congressman. “They have received much opposition from Jewish organizations and others who say it belittles the suffering of the Holocaust and the millions who lost their lives. Your answer?”

Last Thursday, Clyburn said Trump’s portrayal of the media as “enemies of the people” resembles the Nazi demonization of the press. “This country is on track to repeat what happened in Germany when it was the largest democracy, when it elected a chancellor who then co-opted the media,” Clyburn told Fox News Digital.

While some have criticized Clyburn’s comparisons, it’s worth noting that even Trump himself has complained that the US military no longer resembles Nazi Germany. A book about his presidency by reporters Susan Glasser and Peter Baker quoted Trump complaining to his then-Chief of Staff, General John Kelly, “You damn generals, why can’t you be like the German generals…in WWII?” 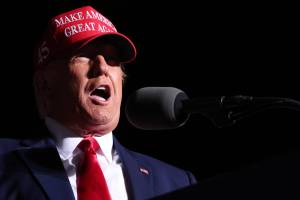 On Sunday, Clyburn expanded his comments. “I’ve spoken to a lot of Jews, there’s a lot of Jews in my congressional district … and they know that’s the stuff that’s caused this kind of deterioration in democracy,” he said. “It has nothing to do with how difficult it was. I’m talking about slavery and how difficult it was. But to get the facts of what is going on here, election deniers setting up procedures by which local committees can… overturn the results of the election. Calling the press the enemy of the people. co-opt evangelicals. I grew up in the Christian faith. [I was] born and raised in a vicarage. I know a great deal about religion and I know it [in fascism] There is always an attempt to co-opt religions and that is what is happening here.”

“If people want to deny it, that’s fine, but the facts are very clear,” Clyburn continued. “I’ve studied history all my life. I taught history. And I tell you what I see here are parallels to the history of this world in the 1930s in Germany, in Italy.”

“Are the voters . . . implying from what you’re saying that by not voting Democrat in this election, they’re somehow supporting something like the rise of Hitler?” Brachse asked.

But Clyburn didn’t paint all Republicans with the same brush. He clarified that he was specifically speaking about people supporting candidates who lie about the legitimacy of elections. “No,” Clyburn said. “If they don’t vote against refusers. Unless they vote against liars, people who lie know full well they are lying, we all know they are lying. [The 2020 election] was the cleanest election in the history of the country. Donald Trump’s own appointee said it was the cleanest in the country’s history.”

“So if they lie, they deny, they dry out to erase, they try to cancel votes,” the congressman concluded, “vote against this stupidity.”