Watts Water Technologies, Inc. (NYSE:WTS – Get Rating) shares have received an average recommendation of “Hold” from the nine rating agencies that currently cover the company, reports Marketbeat.com. Five analysts rated the stock as “hold” and two as “buy.” The average 1-year target price set by analysts covering the stock last year is $133.40.

In other news from Watts Water Technologies, insider Elie Melhem sold 240 shares of the company’s stock in a transaction on Tuesday, August 23. The stock sold at an average price of $149.33 for a total value of $35,839.20. Following the transaction, the insider now owns 12,063 shares of the company’s stock valued at $1,801,367.79. The transaction was disclosed in a legal filing with the SEC, which can be accessed through the SEC’s website. 1.00% of the shares are owned by insiders.

Watts Water Technologies, Inc designs, manufactures and markets products, solutions and systems that control and conserve the flow of fluids and energy in, through and out of buildings in the commercial and residential markets in the Americas, Europe and Asia Pacific , the Middle East and Africa. The Company offers residential and commercial flow control products including check valves, water pressure regulators, temperature and pressure relief valves and thermostatic mixing valves. 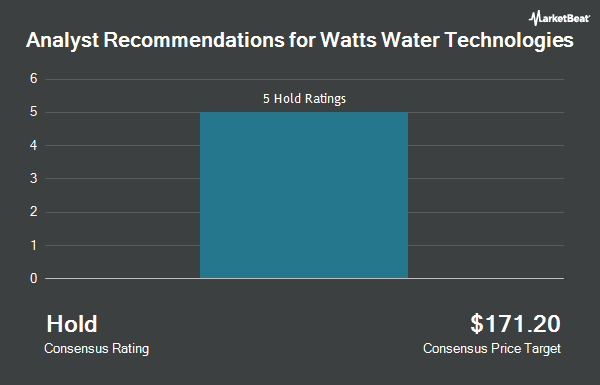 Hear this before you consider Watts Water Technologies.

MarketBeat tracks Wall Street’s best-in-class, top-performing research analysts and the stocks they recommend to their clients on a daily basis. MarketBeat has identified the five stocks that top analysts are softly whispering to their clients to buy now, before the broader market takes hold… and Watts Water Technologies wasn’t on the list.

While Watts Water Technologies is currently rated a Hold by analysts, top analysts believe these five stocks are better buys.