After a strong sports season in autumn, the Spartans want to continue their sporting success this winter. Last Monday, the first official training session at Berthoud High School (BHS) for basketball, wrestling and swimming took place. Spartans new and old turned up Monday for their first after-school winter practice session, hoping to build on their fall success when the football team returned to the playoffs for the first time in four years and the girls’ softball team made it to the state tournament.

“This is a place to build each other up,” said Alan Gibson, the girls’ collegiate basketball coach, in his opening remarks to the 2022 girls basketball team. Some thirty players crowded around Gibson as he spoke about the importance of teamwork and the expectations of the team spoke. Next, assistant coach Gary Ozzello spoke about how character can trump talent on the pitch. Despite his immense talent, NBA superstar Steph Curry misses 57 percent of his three-pointers, but it’s his good character that allows him to bounce back after every miss, Ozzello said. 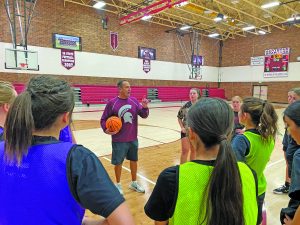 Photo by Will Cornelius – Coach Alan Gibson talks to his players before a transition drill.

Gibson then broke the huddle and had the girls warm up in small groups with an easy shootaround. “We’re going to be in midseason form in the next 15 days!” Gibson exclaimed, encouraging his players. The importance of teamwork and leadership was paramount as the coaches made sure each group had a senior and a freshman. After half an hour of filming, the training shifted to working on transitions as a team. “Don’t be ignored,” Gibson told his players, encouraging them to work and communicate as a team. The team then practiced defense and post protection. Ozzello then told his players to “get big and make noise” while guarding each other. Practice ended with more shots before ending with the girls running Gasser from one end of the court to the other.

After practice, Gibson said he felt “really good” about the team and the season ahead. “We started building on this year back in the spring of last year. So this is just a continuation of what we’ve been doing and building,” he said. One change the team has to adjust to this year is a new league and classification. But Gibson sees this as an opportunity for the team to test themselves. “We’re playing in great competition, both in our league and in our non-league games,” he said.

One of those seniors is point guard Katie Vierra. “I’m super excited. Of course we are missing many of the starters from last year. Whenever you lose seniors, you’re expected to be worse off, [but] It won’t be like that,” said Vierra about the coming season. She says playing as a team will be key to their success. “We’ll do that extra pass if it’s necessary. There will be no one who just shoots randomly,” she said.

The Lady Spartans’ first game will be at home on November 29 against Loveland rivals Thompson Valley High School.

After the girls’ basketball team finished, the boys’ basketball team practiced. With nearly forty guys showing up, sophomore coach Lee Espinoza started sprinting all over the court. “No ball for the first 45 minutes, look who wants it,” Espinoza said quietly from the benches while his players exhausted themselves as they ran up and down the court. “Lotta, these kids have been working hard non-stop throughout the offseason,” Espinoza said as he watched. The boys’ practice then switched to slide run slide cone drills to work on the players’ defensive skills. “Who can play defense for a whole quarter?!” Espinoza exclaimed.

The first part of the training was strenuous, almost without basketballs, but with a lot of panting and sweating. The only chance for the lads to take a break or touch the ball is that a player chosen at random by the coaches could sink two consecutive free throws while the rest of the team looks on. The exercise simulated the pressure players face from the free-throw line in a game while promoting the team-oriented nature of basketball.

After that, the mood of the practice changed, with music playing in the background, the players split into small groups for friendly shootouts. For many of the kids, the competitive juices started flowing when they started making baskets. Espinoza then divided the players into groups of three, facing each other. The boys raised their voices and communicated with each other as passes and shots whizzed past on either side of the gym. Dribbling a basketball, Espinoza paced back and forth watching the players.

Towards the end of practice, the players took turns practicing five-on-five in a scrimmage. After a last free-throw exercise, the players crowded around the coaches. “You can all bring something to the program. Everyone is just as important as the other,” Espinoza told the team. He spoke about the importance of the program as a whole and everyone who contributes.

After training, Espinoza spoke about the progress his players have made during the off-season and the strong cohort of new players joining. “I’m thrilled with the numbers we’re getting,” he said. “A lot of freshmen this year, I want to keep them all and I can only do that with a D-Team,” Espinoza said. This year he hopes to have four boys basketball teams.

During the off-season, Espinoza formed a club team to keep his players engaged. The team competed in several spring and summer tournaments, performed well and grew. “They did well … we’re starting to figure out how to win,” he said. Every season is different, former seniors have gone and young players are taking their place. But Espinoza said many of his older players have been working in the off-season. “We will be young. But my core group of college players … I’ve seen more of them in the last year than my own wife,” Espinoza said, half-jokingly. “They are always here. I’ve always been a proponent of when a bunch of kids show up and play and want to get better. I’ll open the gym all day,” he said.

This Saturday, the boys basketball team travels to Timnath High School for a charter game. Tipp-off is on November 19 at 3:00 p.m. Their regular season begins November 29 when they host Greeley West High School.

In addition to the basketball kick-off, boys and girls in wrestling and girls in swimming also held their first exercises on Monday. At the conclusion of wrestling practice, Head Wrestling Coach Josh Galindo spoke to his team about the year ahead and the intensity he wanted to see from wrestlers. This year marks the first year that BHS is fielding an all-girls wrestling team. Assistant wrestling coach Matt Hebe stood back and reflected on the first practice session. “It’s preseason, so the idea right now is to get everyone in shape and change their minds about wrestling,” he said.

This Saturday at 6pm BHS will host a foundation wrestling match under the lights at Max Marr Field against Loveland High School. The match comes with a heavy heart as the father of one of Berthoud’s wrestlers, David Garman, died Tuesday after being involved in a horrific accident on I-25. Proceeds from the game benefit the Garman family.

Donations can also be made directly through GoFundMe at www.gofundme.com/f/support-david-garman-family.