Zaha Hadid Architects has been announced as the winner of the competition to design the new Hangzhou International Sports Center. The project includes a football stadium with 60,000 seats and practice fields, an indoor arena with 19,000 seats and a water sports center with two 50-metre pools. The development is part of Hangzhou’s Future Science and Technology Cultural District and is well connected to the city’s growing subway network. 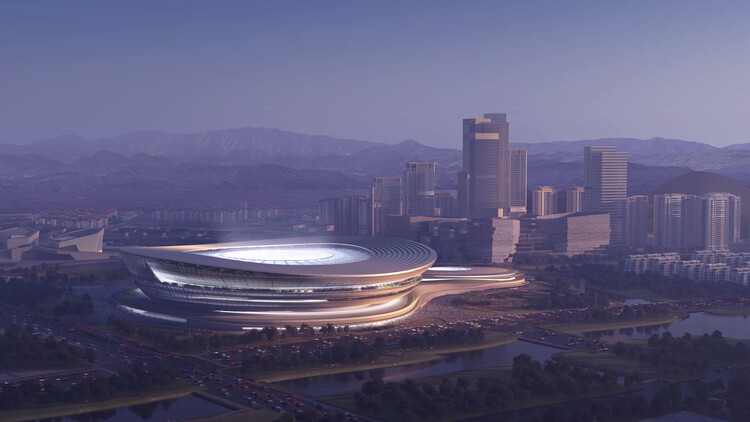 The project is a response to Hangzhou’s growing population, which is home to many of China’s biggest tech companies. The sports center aims to provide a variety of facilities for both grassroots and professional athletes. The compact design allows the site to be transformed into public spaces for the city, with parks and places for gathering, relaxation and recreation along the riverbank.

The design of the football stadium, the largest venue within the center, is based on the area-specific terracing of the tea plantations and meets international FIFA standards. The stadium’s façade opens outwards with louvers housing terraces that house a variety of dining options and offer panoramic views over the city. The materiality and detailing of the slats give the stadium a layered, geological appearance of solidity when viewed up close. Seen from a distance, the lamellar facade becomes transparent and connects the public spaces under the stadium’s seating shell with the city.

The indoor arena operates independently from the stadium and is designed for maximum operational flexibility. In addition to sporting events, major music and cultural events can also take place here. Across the park, the water sports center includes two 50-meter pools suitable for competitions, training and instruction for all levels from beginners to elite swimmers and divers. By incorporating multi-use programs, the complex hopes to be used year-round and become a focal point for the surrounding community.